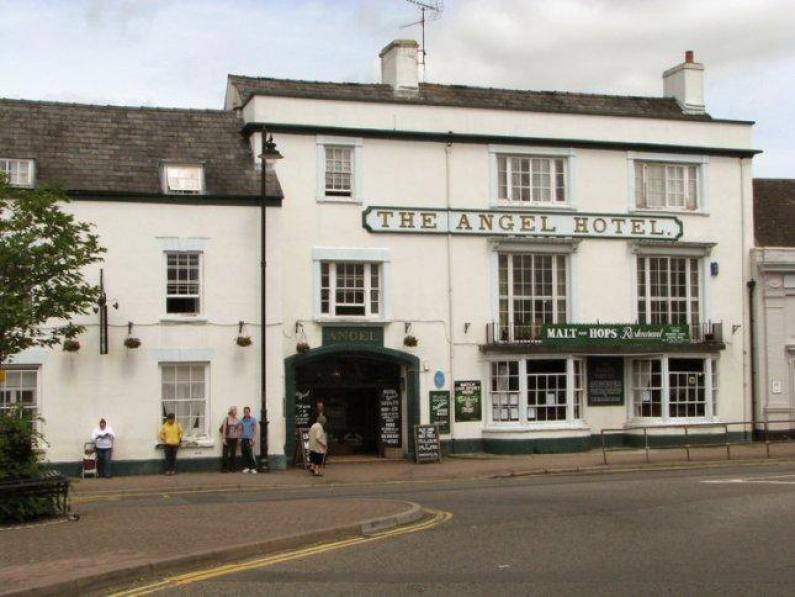 The Angel Hotel located on the North side of the Market Place was originally built c1650. There was a building on the site on a map of 1608. It has an early c19 stucco faced front, parapet, three storys, three light windows with contemporary bay windows on the ground floor. The bay windows were reputedly recovered from the demolished Highmeadow House. The Court Baron & Court of Survey for Staunton Manor, and latterly the Divisional Court were held at the Hotel. It was also the venue for meetings of inquiry, rent audits. public dinners etc. Between c1660 and c1740 and from 1792 it housed the local Excise Office and from the later date it also housed the Post Office. In 1831 It was the centre of military operations during the riots in the Forest and served as a temporary prison for captured rioters, including Warren James, the leader of the riots. It was primarily, however, a coaching inn on the routes between Monmouth, Gloucester and Bristol. The carriage arch and yard can still be seen, but it is now glassed over and used as a bar. Occupiers: 1830 - Thomas Holder; 1839 - William Batten; 1858 - James Dennis; 1864 - Milson Charles Porter; 1876 - James Griffith; 1877 - Richard Porter; 1891 - George William Holmes; 1903 - Edward James Highley; 1914 - BC Williams; 1919 - William H. Fellows; 1927 - Percy Cripps; 1960's - Percy Paddock; 1960's - Winchurch family; 1970's - Hibberts; 1999 Wayne Childs (managing director)