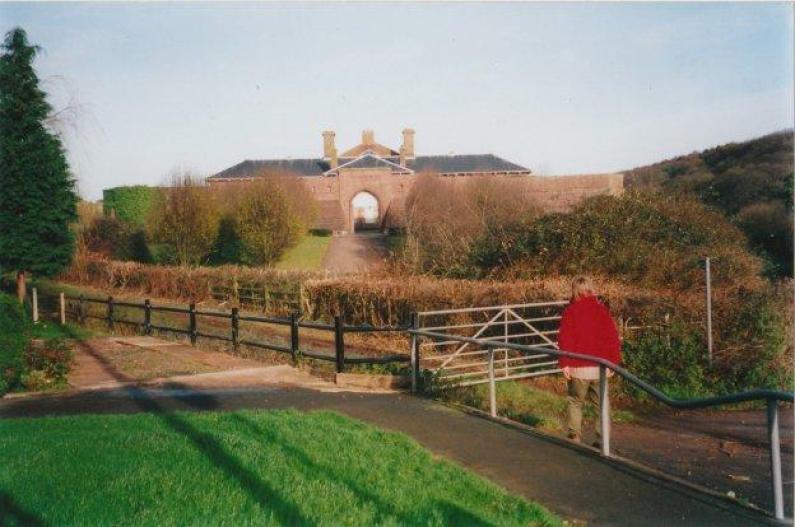 Littledean Gaol, just outside Littledean on the Littledean to Elton road, was designed by a leading prison architect of the day on lines suggested by one of the greatest prison reformers, Sir George Onesiphorus Paul (1746 -1820). It was built in 1791 on the site of an old ironworks, and is a remarkable building architecturally, with the fine classical lines of the 18th century. Much of the gaol is still in its original form. Sir George Onesiphorus Paul had revolutionary ideas about the housing and reformation of prisoners. Just sending them to prison, he thought, was unlikely to assist their rehabititation; education and useful labour were essential as well as punishment, and they must be housed in healthy accommodation. The building constructed at Littledean, and designed for 24 inmates, was described as a House of Correction, or Brideswell, rather than a prison. It was built for short-term offenders from the Forest of Dean, men, women and children ( as young as ten), and for prisoners on remand. Each prisoner had two cells, one for sleeping and one for day-time working. All the cells were extremely well ventilated, since the windows, though shuttered, had no glazing. The establishment was probably not needed for the Forest, and in its early days was not always full. In the first 26 years only 195 prisoners were detained there, the most at any one time being six. Between 1798 and 1803 it had virtually no prisoners. However, numbers increased after 1816. Onesiphorus Paul's reforming ideals were soon eroded. By about 1820 prisoners had only one cell each, and in 1840 a treadwheel was installed for men and boys over 14. Seven men could be put on it at a time, for up to nine hours a day in summer, six in winter. However, a water closet was attached to each night cell in 1844. The building was closed as a house of correction in 1854, and sentenced prisoners ceased to be housed there, though it continued to be used for remand prisoners. It was also now use as a police station. The police moved out in 1972. In 1874 the magistrates' court was transferred there from Newnham and stayed until 1985. During the Second World War archives from the Gloucestershire Record Office were stored there, and it was an ARP centre. The building was sold to the Ecclesiastical Insurance Group in 1985 for use as a storage and computer centre.