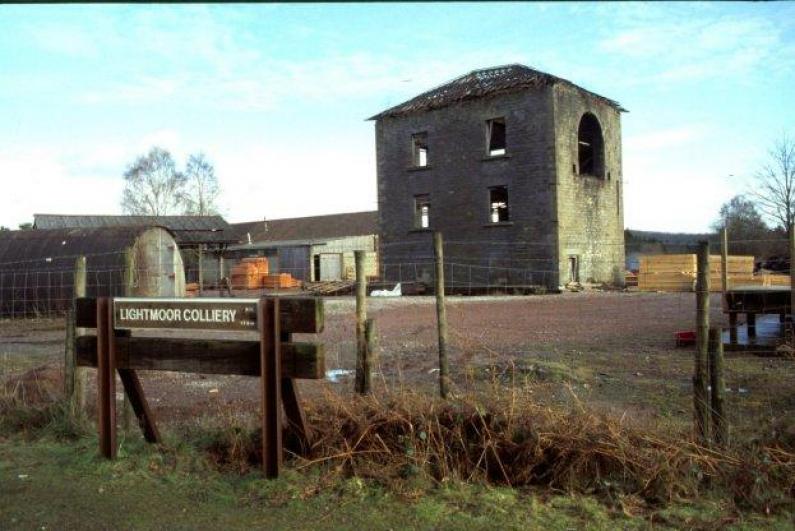 The gale was awarded to Moses Teague and William Crawshay in 1841, although work had begun in about 1832, and there were two shafts by 1835. Pumping and winding engines were working by 1841 and there were four shafts by 1854. Further expansion included deepening of the shafts (to 936 ft) and acquisition of adjacent gales, and the colliery became one of the largest in Dean, producing 86508 tons in 1856 and 800-900 tons/day in 1906. 594 persons were employed underground, with 110 on the surface, in 1899. The colliery worked the top of the Upper Coal Measures (Supra-Pennant Group), which includes the Twenty Inch, Lowery, Starkey, Rocky, and Churchway High Delf Seams, mainly household coal. Lightmoor had an early tramroad connection with the Forest of Dean Tramroad at Ruspidge, replaced by a private line to the Forest of Dean Branch near Cinderford in 1854; there was also a connection with the Severn and Wye Railway's mineral loop. In later years there were problems with water, leading to the purchase of Speech House Hill and (jointly with Foxes Bridge) Trafalgar Collieries. Closure came on 8th June 1940, and for a time the buildings were used for military purposes. Poor. The stone pumping engine house (now roofless), the last to survive in Dean, some offices, the tip and a pond remain, and the site is now used as a sawmill. The pre-1830s beam engine is preserved in the Dean Heritage Museum.