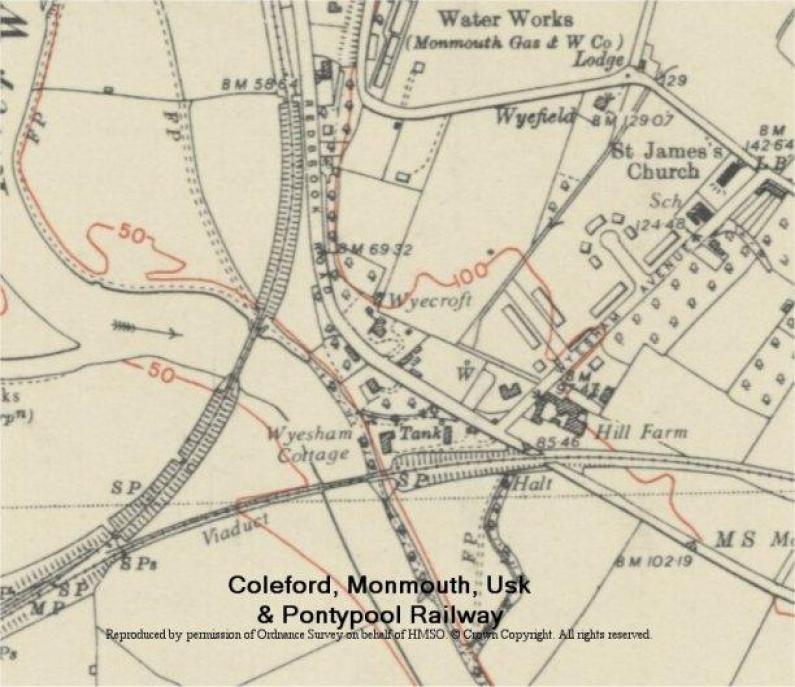 The Act of Incorporation of the Coleford, Monmouth, Usk and Pontypool Railway was passed on 20 August 1853. The line opened from Little Mill Junction, near Pontypool, to Usk on 2 June 1856, and from Usk to Monmouth (Troy) on 12 October 1857. The engineer was David Jones, and Messrs Richards, Giles and Gaskill were the contractors. The 1853 Act empowered the company to purchase the Monmouth Railway (a horse-worked tramroad from Coleford), although this was never formalised. Little was done to improve the tramroad and the proposed standard-gauge extension to Coleford did not materialise. However, a short extension from Monmouth across the river to connect with the Monmouth Railway via an interchange wharf at Wyesham Junction (the section of interest here) was opened to goods traffic in 1861 (probably 1 July). In the same year the CMU&PR was leased to the West Midland Railway, which was amalgamated with the Great Western Railway on 13 July 1863, but the CMU&PR itself was not vested in the GWR until 1 January 1887. The Pontypool-Monmouth line was officially closed to passenger traffic from 13 June 1955, although an enthusiast’s special ran on 12 October 1957. The Pontypool-Usk section remained open for goods for some years. The line east of Monmouth only began to carry significant amounts of traffic, including passengers, when the Wye Valley Railway to Chepstow was opened on 1 November 1876, followed by the Coleford Railway on 1 September 1883. The latter was closed on 1 January 1917, but the WVR lasted for goods traffic until January 1964, after which the line from Monmouth to Wyesham and beyond was lifted. Evidence: earthwork, structure.